Stevenage Cycling Club member, Steffan took part in Ride London last weekend. Steffan is a triathlete and so this ride provided some useful training miles whilst enjoying what has become an iconic cycling event on the UK sportive/gran condo calendar. 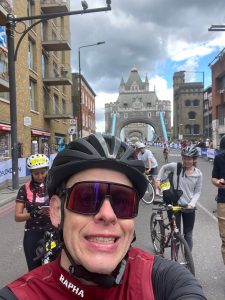 Steffan cycled with 2 cyclists from Gorilla Firm in Northampton and they all worked together to complete the route.

RideLondon was first held in 2013 and has since been an annual legacy of the London 2012 Olympic Games.
20,000 cyclists took part this year on closed roads around London and Essex.
The series of rides started on Victoria Embankment and concluded on Tower Bridge.